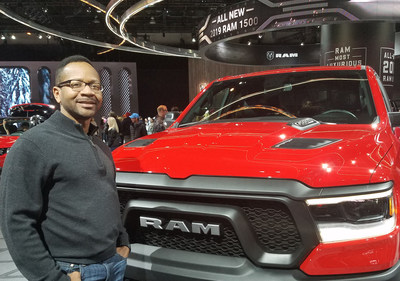 Burnett received his award at the Historically Black Colleges and Universities (HCBU) Engineering Deans Power Breakfast on February 10 in Washington, D.C., attended by distinguished HBCU engineers, deans and other prominent leaders from industry, academia and the military. The awards breakfast was part of the BEYA Global Competitiveness Conference that took place February 8-10.

«Eric has made significant contributions to the research and development of automatic transmissions during his 23-plus year career at our Company,» said Michael Solt, Director, Automatic Transmission Engineering, FCA US LLC. «He is a highly respected technical leader who consistently makes tough decisions. Eric inspires and motivates others to achieve a higher performance of themselves and for our products. He demonstrates the highest character and integrity in everything he does and is a true asset to the Company.»

Burnett is a member of the Society of Automotive Engineers and a frequent presenter at the organization’s conferences.

«It is a tremendous honor to receive recognition for my accomplishments,» Burnett said. «I truly owe it all to my family and peers that have facilitated my continued growth and shared in my successes. It is my privilege and responsibility to share my life lessons with the community and the next generation of African-American leaders.»

The following FCA US employees earned recognition from BEYA as Modern Day Technology Leaders for 2018:

FCA US has a longstanding commitment to recruiting diverse talent and supporting STEM education initiatives for minorities, including supporting organizations such as BEYA, the Society of Hispanic Professionals Engineers and others.

The Company also supports various organizations that advance women’s involvement in STEM professions, including Michigan Council of Women in Technology, the Society of Women Engineers and Inforum’s AutomotiveNEXT.

About the Edward Welburn Legacy Award

The award honors Edward Welburn of General Motors who, in 2003, became the first African-American in the automotive industry to achieve the position of chief designer. Welburn was the 2015 recipient of the Black Engineer of the Year award.

U.S. Black Engineer and Information Technology magazine provides news and information about black engineers, technologists and entrepreneurs, as well as information on programs such as the Black Engineer of the Year Awards and the Top Supporters of Engineering Programs at Historically Black Colleges and Universities program.

About FCA US LLC

FCA US LLC is a North American automaker based in Auburn Hills, Michigan. It designs, manufactures, and sells or distributes vehicles under the Chrysler, Dodge, Jeep®, Ram, FIAT and Alfa Romeo brands, as well as the SRT performance designation. The Company also distributes Mopar and Alfa Romeo parts and accessories. FCA US is building upon the historic foundations of Chrysler Corp., established in 1925 by industry visionary Walter P. Chrysler and Fabbrica Italiana Automobili Torino (F.I.A.T.), founded in Italy in 1899 by pioneering entrepreneurs, including Giovanni Agnelli. FCA US is a member of the Fiat Chrysler Automobiles N.V. (FCA) family of companies. (NYSE: FCAU/ MTA: FCA).