GRAND RAPIDS, Mich., Feb. 9, 2018 /PRNewswire/ — In his debut book, The IF in Life: How to Get Off Life’s Sidelines and Become Your Best Self, former NFL running back and Dancing with the Stars Season 24 champion, Rashad Jennings, shares his inspiring story, imparts practical advice, and encourages readers to follow their dreams. 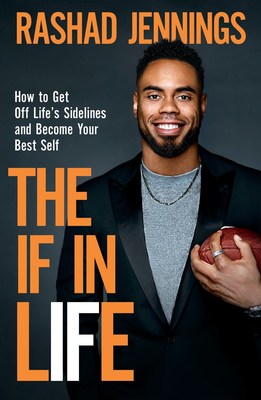 Growing up, Jennings was overweight, had poor vision, suffered from debilitating asthma, and held a 0.6 GPA—yet he still hoped to one day play in the NFL as a running back. To say the odds were stacked against him is an understatement. Through hard work and determination, encouragement and tough love from his brothers and coaches, and the support of mentors too numerous to count, Jennings became a record-setting NFL running back. During his eight-year NFL career, he played with the Jacksonville Jaguars, the Oakland Raiders, and the New York Giants. And now, through the Rashad Jennings Foundation, Jennings is focused on inspiring youth by making education an enjoyable experience, providing mentorship, and encouraging an overall healthy lifestyle. In 2017, he helped more than 30,000 students through his foundation read over 167,655 books.

«Whether you realize it or not, certain moments in life, no matter how significant or small they seem, can change your path and have a positive impact on where you go and how successful you become,» said Jennings. «The IF in Life is about those «IF» moments that have shaped the man I’ve become and brought about the realization of my dreams. My hope for this book is that it brings motivation and inspires young people to become their best self.»

In The IF in Life, Jennings writes about the decisions that shaped his destiny, both on and off the field. From overcoming injuries and setbacks, to setting goals and dreaming big, his transparency about his journey will encourage readers to hold on to faith during uncertainty and remind them that greater things are waiting if you stay focused and believe.

«Rashad’s contagious spirit will inspire countless people to take notice of the ‘IF’ moments in their lives that can help lead them down a path to becoming the best they can possibly be,» said Annette Bourland, Senior Vice President and Group Publisher at Zondervan. «We are honored to be working with Rashad to share his message.»

Featuring photos from Rashad’s childhood, college years, and professional career, The IF in Life will be available online and in stores on May 8, 2018.  The book is available for pre-orders now.

About the Author: Rashad Jennings is a national personality. Throughout his successful eight-year career in the NFL, as well as his championship performance on ABC’s Dancing with the Stars, Jennings has gained the love and support of fans across the country. Today, Jennings is driven to make a national impact and lasting legacy. The Rashad Jennings Foundation is dedicated to inspiring youth by making education fun, providing mentorship for individual success and promoting health and fitness. Follow Rashad on Twitter, Instagram, Snapchat and Facebook, @rashadjennings.