DETROIT, Sept. 14, 2021 /PRNewswire/ -- 313 Presents today announced an expanded relationship with Comerica Bank. Detroit's largest banking network provider will be the exclusive presenting partner of the iconic Fox Theatre in the heart of The District Detroit. 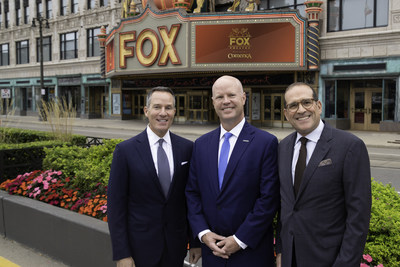 The partnership will feature community initiatives focused on youth empowerment. The philanthropic outreach combines resources from each partner to engage and connect community organizations and schools to the Fox Theatre and to other resources such as financial education and career development. Specific community-focused programming will be announced at a later date.

Additionally, the Fox Theatre and Comerica Bank will provide exclusive benefits for Comerica card holders, set to launch in 2022.

"The Fox Theatre is one of the most legendary showplaces of the world and plays an integral role within our community. We are excited to welcome Comerica Bank to help us amplify this beloved venue's expansive array of world-class entertainment for our guests." said Howard Handler, 313 Presents President. "Comerica Bank's commitment to the Fox Theatre and Detroit is fully aligned with our goal to make a positive difference in people's lives within and around the city."

Comerica Bank's presenting partnership with the Fox Theatre expands upon its established sports and entertainment relationships, including with the Detroit Red Wings and Detroit Tigers, and deepens the bank's investment into the city of Detroit and Southeast Michigan, which dates back 172 years.

"As one of the nation's most iconic entertainment venues, the Fox Theatre is deeply rooted in Detroit's rich history and has become vital to the city's rebirth and renaissance over the past two decades," said Mike Ritchie, Comerica Bank Michigan Market President. "Our goal in partnering with 313 Presents focuses on supporting the Fox Theatre's presentation of marquee events and performances while preserving the grandness of the theatre's authentic and original beauty. Additionally, we look forward to building collaborative philanthropic engagements that will further connect our communities to the Fox Theatre and create a lasting impact."

Olympia Development of Michigan has also partnered with Comerica to name the parking garage located at 50 W. Montcalm Street, across from the historic Fox Theatre, the Comerica Garage, which includes new signage to be installed soon.

In July 1987, Michael and Marian Ilitch purchased the Fox Theatre and began a robust restoration of the building that cost more than $12 million to complete. After nearly a year-long renovation, 100 percent of the theater was restored, preserving 80 percent of the original finish, with added amenities that cater to discerning corporate and private patrons.

The suite level of the theater was converted into a private viewing area, providing an intimate setting for guests in 17 "suite style" boxes. The venue was declared a National Historical Landmark on June 29, 1989 and continues to offer an intimate and immersive performance experience for guests and artists alike. In addition to the annual Fox Theatre Series, which features a collection of award-winning Broadway musicals, interactive stage shows and treasured holiday favorites, the venue hosts a wide array of the most renowned names in music and entertainment.

Comerica Bank recognizes that its success is intertwined with the prosperity of the communities it serves. In 2020, Comerica Bank and Comerica Charitable Foundation committed nearly $2 million in supporting Michigan community programming and businesses impacted by the pandemic. Comerica also moved $2.5 million in deposits to First Independence Bank, the only Minority Depository Institution (MDI) headquartered in Michigan and located on Woodward Ave., that launched a strategic partnership this will help foster economic viability by assisting minority and under-served communities.

About Comerica Bank
Comerica Bank, a subsidiary of Comerica Incorporated, has served Michigan longer than any other bank with a continuous presence dating back over 172 years to its Detroit founding in 1849. It is the largest bank employer in metro Detroit and has approximately 4,700 employees (FTE) statewide. With one of the largest banking center networks in Michigan, Comerica nurtures lifelong relationships with unwavering integrity and financial prudence. Comerica positively impacts the lives of Michigan residents by helping customers be successful, providing financial support that assists hundreds of charitable organizations, and actively participating in Detroit's downtown revitalization. Comerica Incorporated (NYSE: CMA) is a financial services company strategically aligned by three business segments: The Commercial Bank, The Retail Bank, and Wealth Management. Follow on Facebook: www.facebook.com/Comerica, Twitter: @ComericaBank and Instagram: @comerica_bank.

About the Fox Theatre
The Fox Theatre, headquartered in The District Detroit, is the city's crown jewel. A premier venue for live music and entertainment and one of the largest and busiest theaters in the world, the Fox Theatre was established in 1928 and purchased by Michael and Marian Ilitch in 1987. In 1985, the theatre was listed on the United States National Register of Historic Places, and in 1989 it was recognized as a National Historic Landmark after the Ilitch organization completed a $12 million restoration, returning the venue to its original splendor. The Fox Theatre, which celebrated its 90th anniversary in 2018, has hosted the world's greatest performers and most popular shows, and to this day, continues to provide generations of Detroiters countless memories as one of the most elegant theaters in the world while displaying its versatility in hosting world-class entertainment events, concerts, family shows and community functions.