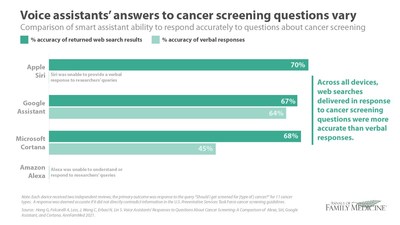 The article is titled, "Voice Assistants and Cancer Screening: A Comparison of Alexa, Siri, Google Assistant, and Cortana" with authors from Stanford University.

The study was conducted using the personal smartphones of five investigators. Each voice assistant was tested twice from different devices. The primary outcome noted in the final comparison was each device's response to the question: "Should I get screened for (type of) cancer" for 11 cancer types.

Siri, Google Assistant and Cortana understood 100% of the queries, consistently generating a web search and/or verbal response. However, Alexa was unable to understand or respond to any of the queries.

The researchers also found that the top three weblinks recommended by Siri, Google Assistant and Cortana provided information that aligned with USPSTF guidelines roughly 70% of the time.

For all, verbal responses to queries were either unavailable or less accurate than those generated by manual web searches.

"This [research] could have implications for users who are sight-impaired, less tech-savvy, or have low health literacy as it requires them to navigate various webpages and parse through potentially conflicting health information," the authors write.